The best education, we have found, and I like to base things on evidence and not ideology, the best educated: homeschoolers, next best, are going to be private schoolers, and then charter schoolers and then public schoolers.
Dr. Ben Carson Jack Kemp Foundation Forum

I agree that I'd put home-schooling first, seeing as smaller class size is correlated with school performance, it makes sense that if you make the classes really small, you'd get the best possible academic performance. Two conditions, though. First, you'd need to ensure that the parent who was doing the teaching had the time and the talent to properly teach the child. They'd need to be financially able to take the time for teaching during the day without impacting their basic standard of living and their financial survival. That might require a socialist type of organization for society where parents weren't required to put in so many hours a day into work. Second, I'd hate for the child to be socially isolated and would prefer to see the child enrolled in a daily sports program. There may be other and better ways to see to it that children are not socially isolated, but I would think that should be a real priority.

But to prioritize private, charter and public schools into any sort of hierarchy makes no sense. There's never been any evidence that any of these are superior to any other. Public vs. traditional private schools, there are distinctions based on admissions. Traditional private schools that serve a wealthy clientele (I used to work in one as the receptionist) are essentially skimming off the cream of the students who are most likely to profit from a really well-funded and well-organized education.

Charter schools do not benefit from capitalism and the innovation that private companies bring to technical fields because schooling is overwhelmingly a labor-intensive process. It makes very little difference to the outcome of schooling whether a schoolteacher is paid by a local government or a private corporation. Paying teachers properly and supporting them in their mission is what counts. Technology is involved to some extent, but technology is nowhere near as decisive as it is in, say, building windmills for generating wind power. Showing films via computer as opposed to the old projectors saves money and makes the teachers job a bit easier, but hardly results in any obvious bottom-line advantages as what really counts in educating children is the after-film discussion that the teacher conducts.

Why would I prioritize public schools and financially starve charter schools? Because public schools take all comers. They accept everyone regardless and put whatever resources are needed into educating all of their charges. Charter schools have a great financial incentive to toss out under-performing students and to only keep the ones that will reflect well on the school.

So it's far from clear what “evidence” Dr. Carson is basing his hierarchy on.
Posted by Rich Gardner at 2:40 PM 1 comment:

Was there an increase in mis-spending? Actually, no. And in fact, the next report is expected to uncover even more expenditures that are simply lining the pockets of charter school owners and investors as the previous investigations simply weren't wide-ranging enough to catch all of the waste, fraud and abuse.
Posted by Rich Gardner at 7:03 AM No comments:


Okay, I found two databases with which to look up campaign donations in support of charter schools. The first one has been used to write some pieces on the subject, I used the site Follow The Money to run a query “Show me School Choice Advocates contributions to ballot measure committees that supported or opposed Vouchers/Charters ballot measures in elections in 2014 (within core federal, state, and local data)“ and it turned up nothing. But this appears to be a good database to use to check on what's going on with campaign finances.

A much more useful site, I ran a query on Campaign Finance Online for PA and found that a particular contributor, Joel Greenberg, contributed $350,000 to the Students First PAC in 2014 alone.

As to general patterns on giving to campaigns that support charter schools, I saw that in in Washington State, 91% of the campaign donations came from just 10 donors. Bill Gates, a Walton heiress and the Amazon people were among the donors. “Of all of the money raised for the charter school initiative, just one-half of 1 percent came from donations of less than $10,000.”


Over the past ten years, campaign spending in PA for and against charter schools has been $10 million for and $8.3 million against.

Among one of the lobby's biggest donors is Vahan Gureghian, the CEO of CSMI, which manages the Chester Community Charter School in Delaware County. According to Follow The Money, Gureghian pumped $336,000 into the campaign coffers of former Gov. Tom Corbett - making him his second largest individual donor over his gubernatorial career.
Gureghian has also donated close to a million to other Pennsylvania politicians and PACs.
The aforementioned Vahan H. Gureghian's Chester Community Charter School teaches 2,600 students. He's number five on a list of the ten biggest PA political contributors. Overall, he runs 150 charter schools spread over nine states.


A 2012 piece from Public Source includes detailed summaries for the 10 biggest contributors in PA.

Joel Greenberg and Arthur Dantchik are partners in Susquehanna International Group, which has used lessons from poker to build a successful broker-dealer firm. The two men spent $446,000 on groups that support vouchers for private schools such as charter schools. In 2010 their Students First political action committee contributed $4.9 million to pro-voucher gubernatorial candidate Anthony Williams, who lost in the Democratic primary election.
Former Governor Corbett was a big recipient of donations from pro-charter school interests and Republicans generally have received more, but some Democrats have received money for that purpose as well.

Posted by Rich Gardner at 9:28 PM No comments:

So, a charter school group serves 11,000 students. One of the members of the management group is a hedge fund billionaire. High employee turnover is a strong sign of poor management and this group has so much of it and other problems that the remaining employees want to form a union.

Sears is run by a hedge fund billionaire and may be entering a death spiral.

The 2012 Republican presidential candidate Mitt Romney ran Bain Capital, not a hedge fund, but a private equity firm. Pretty similar though, in that the position meant he made lots and lots of money sitting at a desk. He served one term as Governor of Massachusetts from 2003 to 2007, but by 2012, was so unpopular in that state that he lost MA to Obama 61% to 38%.

It's not that being a businessman who makes bucket-loads of money hand over fist necessarily means you're incompetent, it's just that making lots of money doesn't necessarily make you a good manager.

Will the charter school group teachers be successful in forming a union? We sure hope so for the sake of both the teachers and the students, but the hedge fund billionaire and others are probably going to fight a union tooth and nail. If the current managers really cared about the teachers and students, they would have recognized that their group was doing a poor job and reforms would have been instituted. No, the managers and the billionaire are in the charter school business to make money and a union would cut into their stakes in the group.

So, when Teachout, an organization of teachers and students in New York City, says that hedge fund and Wall Street billionaires are exerting pressure to force schools to accept standardized test scores as a means of evaluating teachers, I think we'd best give the teachers and students the benefit of the doubt and say that depending on standardized test scores is probably not a great idea.

Posted by Rich Gardner at 8:48 PM No comments: 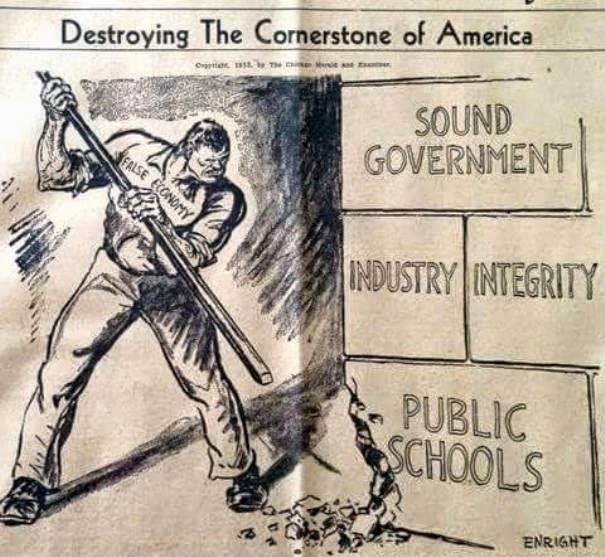 Speak Up For Education and Kids

This cartoon disturbingly depicts today's reality, except that it's from a 1933 edition of Progressive Magazine. Who would you substitute for the "false economy" symbolized by the man? Learn more about a central player in the organized effort to dismantle public education, ALEC: http://educationvotes.nea.org/topics/x-canonical/alec/
Posted by Rich Gardner at 11:17 AM No comments:

How do corporate-private charter schools measure up?

Poorly. Not only do charter schools fail to “boost high school graduation rates or pass rates on most Advanced Placement exams. Another study, released this year, found that students who graduate from traditional Boston public high schools are actually more likely than charter graduates to earn a college degree or another form of postsecondary credential within six years.”

A generally-accepted figure for 9th all the way to 12th grade graduation rates is 85% to 90%. If you're a student, you have about a nine out of 10 chance of making it all the way to graduation. How about in a charter school? The rate there is about 60%.

Who are the people backing charter schools? Basically lawyers and hedge fund managers, people with lots of money who have run out of places to invest it all in. [16 Mar 2015]

Update: Yeah, charter schools can use...um...“stimulating” marketing to get students in their doors to begin with, but that doesn't solve the retention problem.
Posted by Rich Gardner at 1:55 PM No comments:

How to distract the public

Two years ago, the Kansas government had a $700 million budget surplus. Today, that figure has turned into a $279 million deficit and it's expected to be a $900 million deficit by 2019. Why is that? It's essentially a case of “Be careful what you wish for, you might get it.” With a Republican Governor backed by a Republican legislature, Tea Party-approved policies were put into place. They've been an absolute, unmitigated disaster. What to do? What to do?

A-ha! Back in 2013, a state legislator noticed a middle school poster that she thought was overly sexual and inappropriate for children of that age. Problem solved! The Kansas Senate has now approved a bill that a liberal opponent has referred to as “a solution looking for a problem.” Also, “Pilcher-Cook and other supporters of her measure also say that it’s necessary to prevent the distribution of pornography in schools — a problem that has not hitherto arisen.”

All this clearly makes for a wonderful distraction from the utter failure of Governor Brownback's economic policies to work in the way they were advertised.
Posted by Rich Gardner at 6:58 AM No comments: